This article was originally posted in The Daily Record 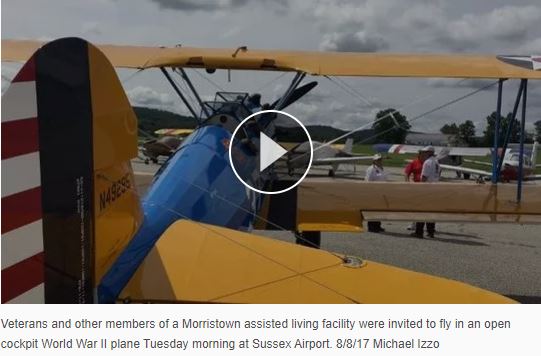 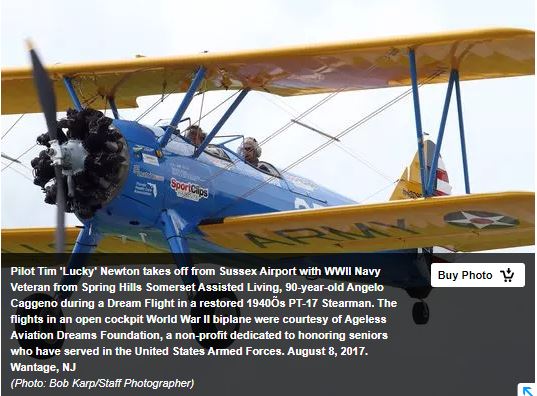 SUSSEX BOROUGH – Veterans and other residents of a Morristown assisted living facility were invited to fly in an open cockpit World War II plane Tuesday morning at Sussex Airport.

Residents of Spring Hills Assisted Living in Morristown and Somerset were able to take a “dream flight” in a restored 1940s Boeing PT-17 Stearman, an open cockpit biplane used for flight training during World War II. They were used as crop dusters after the war.

The first veteran to take flight was George McGinnis, 94, who served in the Army Air Corps from 1942 to 1946. He was a lieutenant who flew a B-17 bomber in World War II.

The second vet to fly was Angelo Caggnero, 90, who served for two years in the Navy during World War II.

Each sat in the cockpit with pilot Tim Newton, a retired Air Force lieutenant colonel, as they soared off the tarmac and spent 15 to 20 minutes about 1,500 feet in the sky. Since some vets are former aviators, they were allowed to take the controls in the air for part of the flight.

“George said he was practicing for this flight in his dreams,” Newton said. “And he flew wonderfully.” 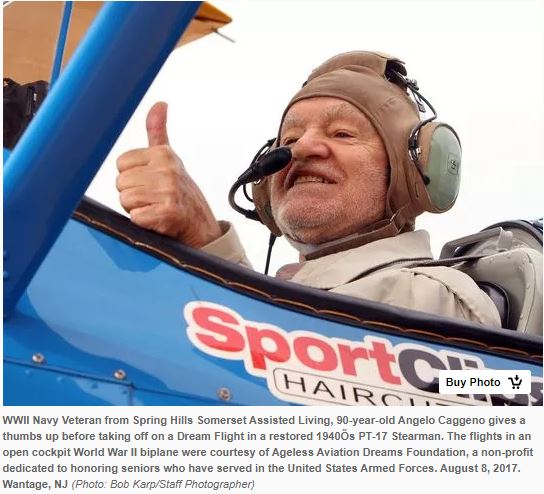 Newton and his wife, Grace, were volunteers for the Ageless Aviation Dreams Foundation, a nonprofit honoring seniors, particularly veterans, by providing free flights in vintage planes. By the end of the year, the organization was expected to exceed 3,000 flights. The pair work in tandem, Tim as the pilot and Grace as the crew chief.

“I just learned how to fly these planes in order to do this. I was drawn to the mission of giving back to those who gave for us,” Newton said. “We both have full-time jobs so we do this in our spare time. It’s very rewarding. Most everyone we fly is over 90 years old, and to see them get back in the air is something.” 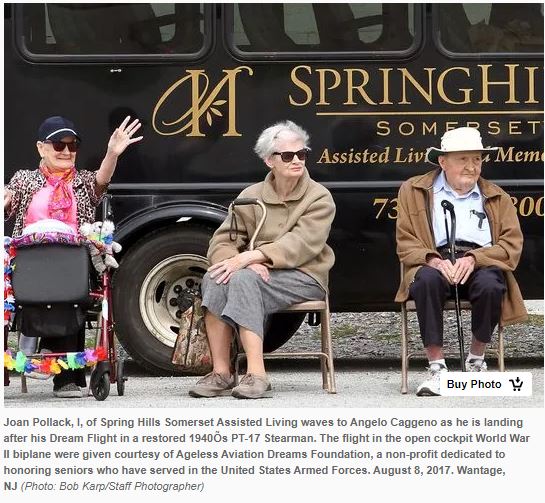 “It’s very good. You’re up there for about 20 minutes,” Terp said. “I’m excited to go up again. It’s beautiful weather.”

Lawrence Spulick, 84, was looking forward to his first ride. He was stationed in Nuremberg, Germany, for two years after World War II.

“I’ve only ever flown in a commercial plane before,” Spulick said. “So I want to see what it’s like.”

Everyone who flew received an Ageless Aviation hat autographed by Newton, as well as a photograph from their trip in the plane. Sussex Airport also held a barbecue for the group Tuesday.