This article was originally published on MyCentralJersey 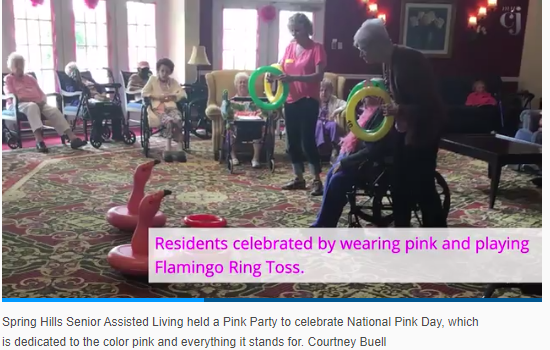 It was no ordinary day June 23 for the seniors at Spring Hills Assisted Living. Residents and staff celebrated National Pink Day, which is dedicated to the color pink and everything it stands for.

“An event like this starts early in the day,” said Susan Porecca, director of recreational services and a Somerset native.  “Before the event, they see the decorations and ask what’s going on.”

Residents congregated in the Great Hall of the facility, which was donned with bright pink streamers, ribbon and decorations that overtook the room. The Pink Party décor was rivaled solely by the attire of the residents and staff, who also wore the color.  The residents become involved as much as the staff who plan the events. 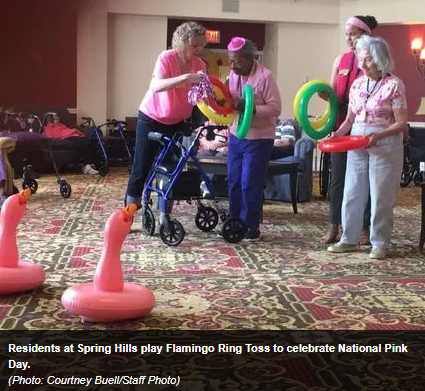 “It gives them something to look forward to, and at the end of the event they thank you profusely and they feel special,” Porecca said. “It reminds me of why we do what we do. To see them smile rejuvenates me, and makes me want to do it again.”

Much of the planning for events like the Pink Party is left to Porecca, who always coming up with creative ideas for events and activities to entertain the seniors living at the facility.

The Pink Party is just one of the many events held throughout the year, and it serves as a way for residents to engage with each other and celebrate, even if National Pink Day isn’t a traditional holiday.

Happenings such as this are planned and discussed as a group about a month or two in advance, according to Porecca.

“It’s usually a holiday theme for events like this,” she said. “For June, there wasn’t really a holiday to plan an event around, but I saw it was Pink Day and thought we could do it big for very little, so we ran with the idea.”

The residents’ smiles were prominently displayed while putting on hats, feathered boas, beads and necklaces to celebrate the color. The main event of the afternoon involved games, both of which had a pink central theme. Pink prizes were awarded to the seniors who racked up the most points.

Kicking off the Pink Party was the Flamingo Ring Toss. Participants tossed rings in the hopes of landing them around the neck of a blow-up pink flamingo.

The next game was a bucket toss in which residents threw pink light-up balls into pink buckets. Although the competition was tough, a winner was crowned for each game, and awarded a pink prize.

A brief snack break preceded the games. Residents were treated to a variety of pink refreshments, including shrimp toast, pink popcorn and a “Pink Flamingo Drink,” made with pink lemonade, cranberry and vodka. The option of a nonalcoholic version of the drink was available, as well.

After the break, Julian Hernandez, a singer and performer from Fortune Entertainment, sang to the residents and played an assortment of songs from pop music artist P!nk.

The residents danced and sang along, forming a conga line around the room, and at the conclusion of the day’s activities, they were “tickled pink” to be part of such an event.