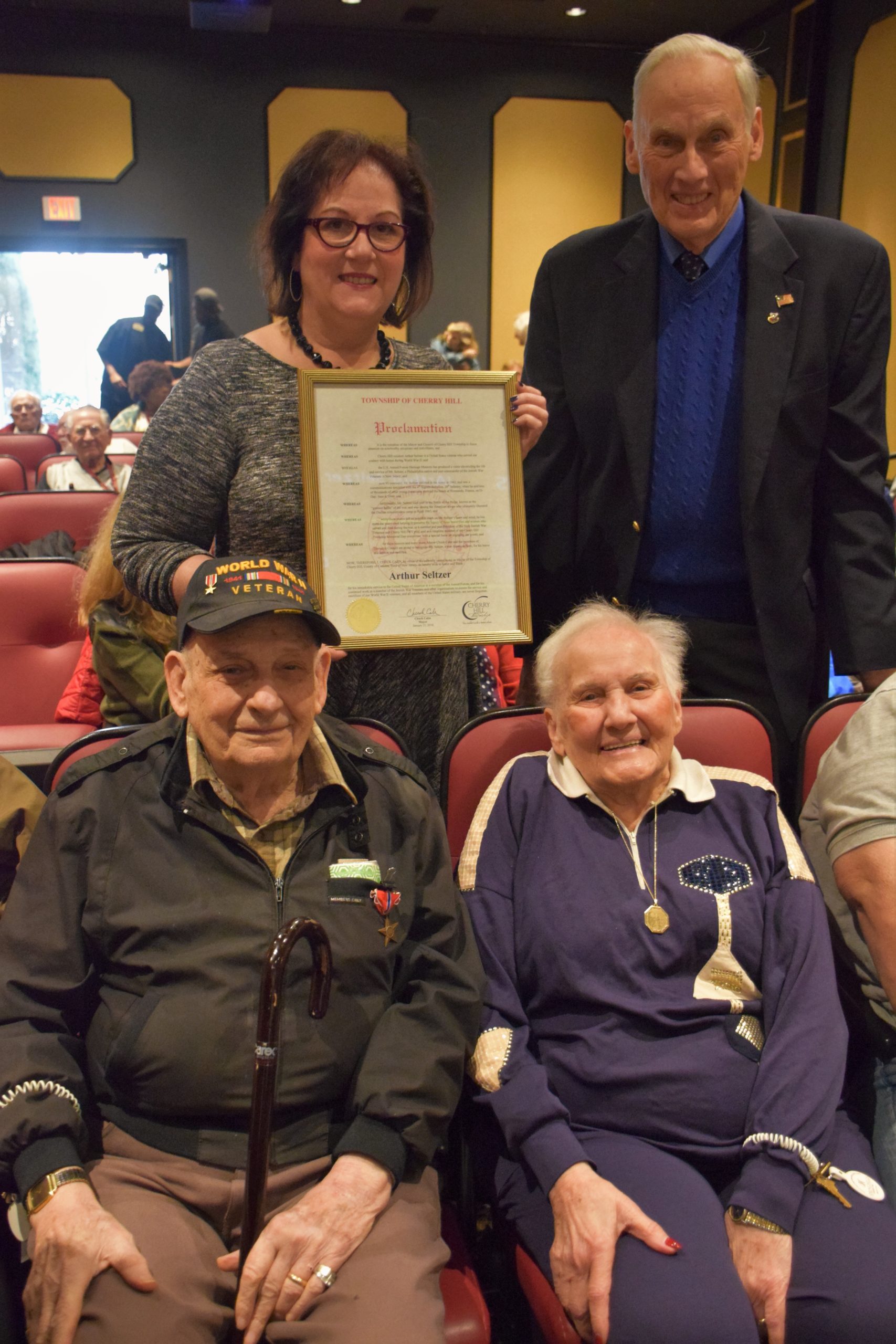 Sitting in an easy chair in front of a video camera and interviewers, Jewish war veteran Arthur Seltzer demonstrated remarkable recall for his 90 years.

Unfazed by cameras and questions, the never-shy Seltzer eagerly recounted his World War II memories in vivid detail — from his U.S. Army training and Atlantic crossing to England on the cruise liner-converted troop ship Queen Elizabeth to his three most significant war events, the D-Day beach landing at Normandy, the Battle of Bulge and the liberation of the Nazi concentration camp at Dachau in Germany.

South Jersey-based Armed Forces Heritage Museum (AFHM) officials taped a documentary last year but have not yet posted it. They said it also will become part of the exhibit collection at the National Museum of American Jewish Military History in Washington, D.C.

Recently, an expanded version of the documentary that includes more Seltzer family history was shown for the first time to the now 91-year-old Seltzer, family members, other Jewish war veterans and friends in the theater of Spring Hill Assisted Living Center in Cherry Hill, where Seltzer and his wife, Mildred, of 61 years moved this year from their nearby Cherry Hill condo.

“I’m overwhelmed by it. And it was a surprise. They didn’t tell me it was going to be shown today,” Seltzer said of the living history project professionally compiled and edited by AFHM president Robert Von Bargen and Nino DePasquale, a  museum board member and its former president who owns a video company.

“I hope it will get more people involved in doing good things for the country.”

Seltzer was a 20-year-old corporal serving as a radio operator in a forward position with the 4th Armored Signal Battalion, shuttling messages back and forth to rear units, to military leaders such as Gen. George S. Patton and to Supreme Allied Headquarters. He was one of the 550,000 Jewish servicemen for the U.S. during the war. 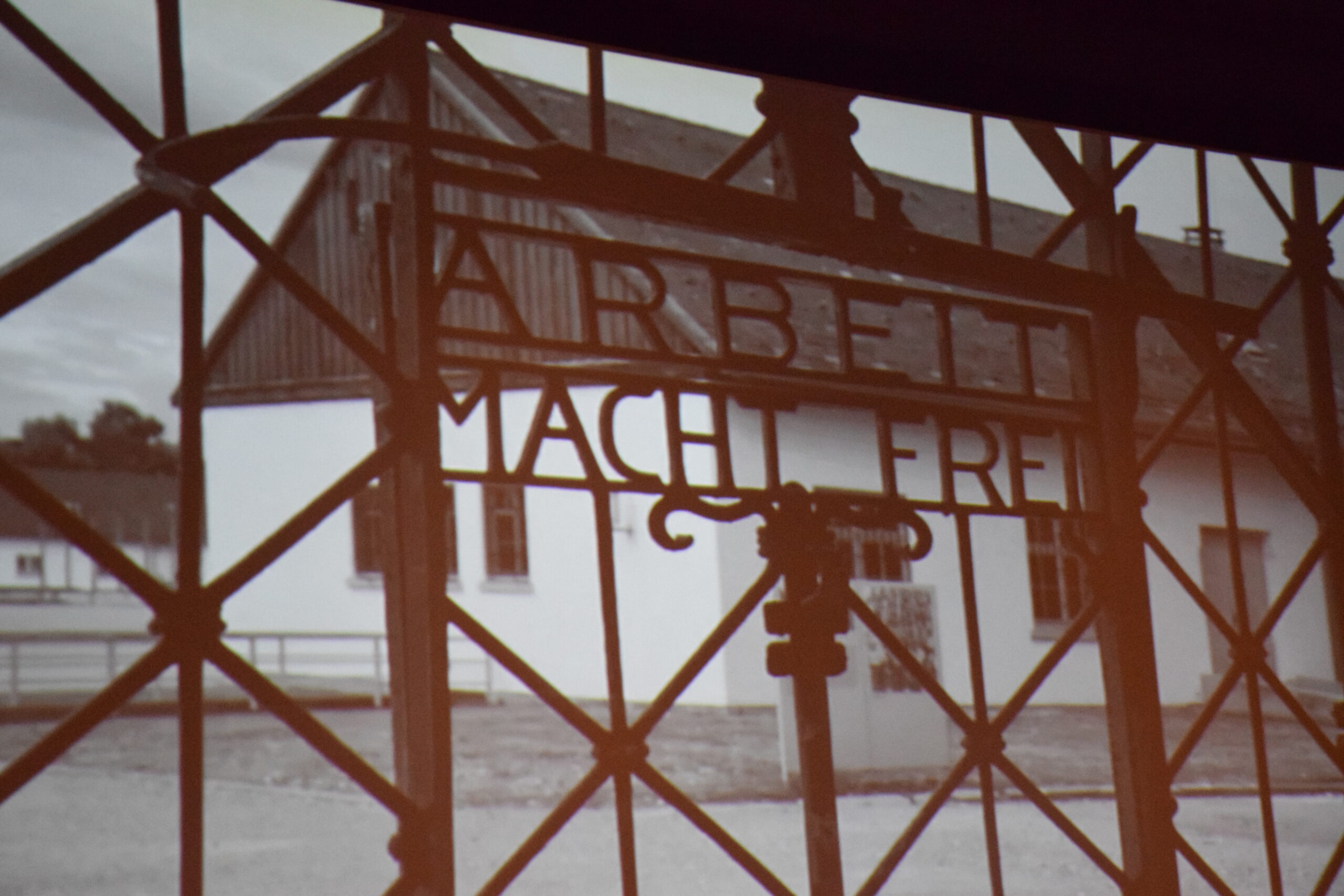 Gates of the former German concentration death camp at Dachau, discovered a few months after Germany surrendered to end the war in Europe in May 1945
(Photo: Hope Horwitz)

His radio equipment, then called VHF, was a secret weapon of its own with a much advanced technology, allowing telephones and teletypes to operate without wire connections.

“Landing at Omaha Beach on D-Day was the longest day of my life,” he said.

He made it ashore in the fourth wave on June 6, 1944, by jumping over the side of his landing craft unlike other soldiers who headed straight down the front ramp of other landing crafts. They were easily gunned down by German guns ashore before making it to the beach.

However, he sank immediately after hitting the water, but not because he was wounded.

“I couldn’t swim, so down I went — and then I dropped my 65-pound pack of gear,” he recalls in the video. He struggled to shore, where wet sand prevented him from digging a foxhole. Instead, he hid behind the only protection he could find — dead soldiers — and waited for more radio equipment to arrive.

“Of the 36 soldiers on our landing craft, I was one of only two who survived,” recalled Seltzer.

Eventually, he sent a radio message for battleship firepower to blow a hole in the bluff — Point Du Hoc — that Army Rangers were ordered to climb. “If we didn’t get that done, we were not going to make it off the beach.”

Naval gunfire then blew open a gaping hole followed by additional firing from the 29th Infantry, allowing troops to move forward to the town of St. Lo.

Seltzer said operating his radio had one critical disadvantage. “Whenever I put up the 9-foot antenna, the Germans could zero in on our position,” he said. 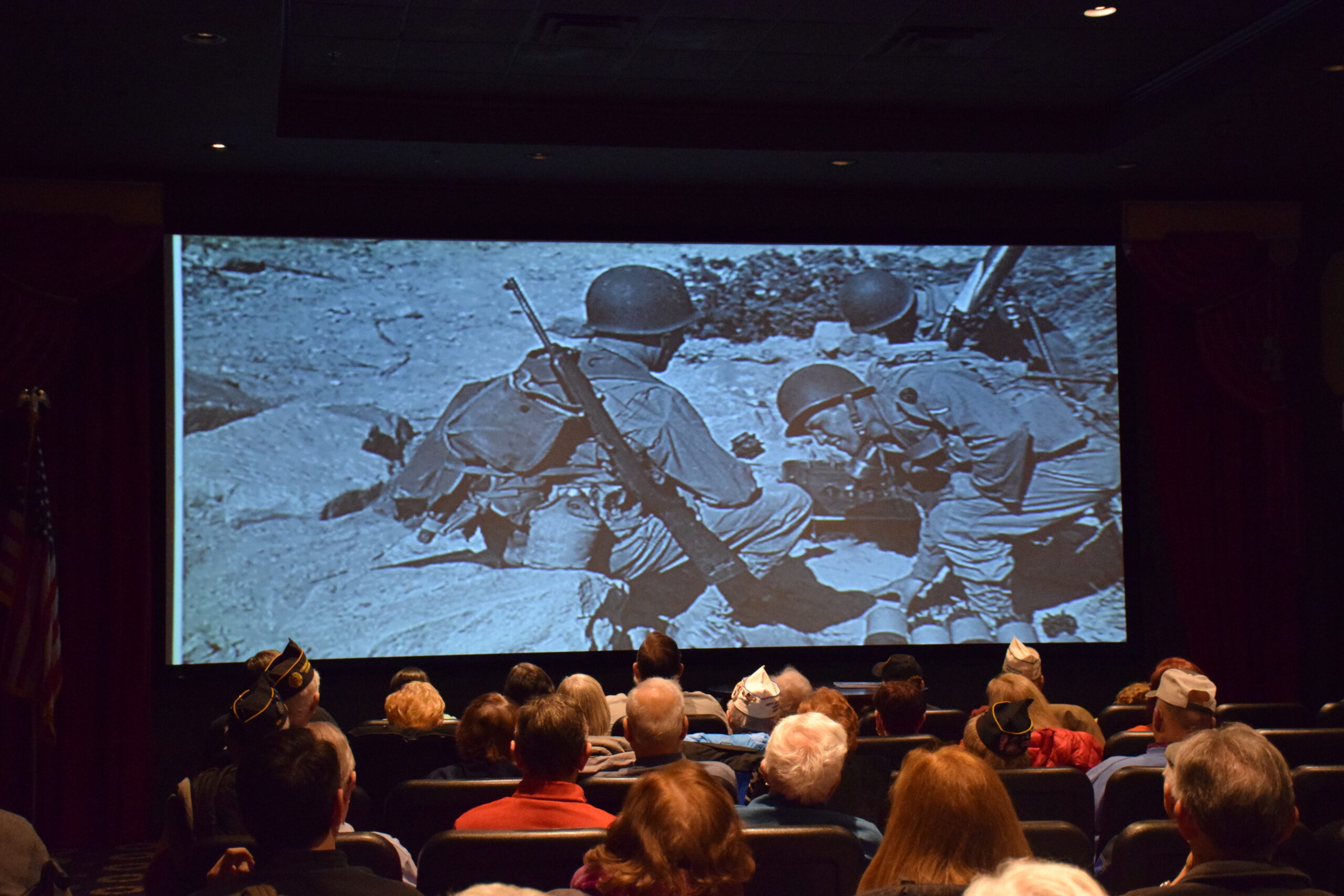 His most vivid memories of the Battle of the Bulge, where the Allies were outnumbered by the Germans in the Ardennes Forest of Belgium, France and Luxembourg, were the frigid temperatures, the absence of winter-issued uniforms and the trees. He said the flying splinters from trees shattered by gunfire killed soldiers as effectively as bullets. He managed to escape a German SS firing squad when he found himself at the rear of an enemy-surrounded group of 150 Allied soldiers who were forced to surrender, thinking they would be taken as prisoners. They were shot instead.

That battle, a German offensive to try to split the Allies, was the largest fought on the Western Front in Europe during the war and also the largest ever fought by the U.S. Army.

After capturing Bastogne and crossing the Rhine River into Germany and then the Elbe River, they met the Russian allies, who were to march into Berlin first. “I knew when we crossed the Elbe the war would be over.”

However, there was one final and horrific experience awaiting him after the official end of the war in May 1945.

His unit was among those who stumbled upon Dachau, 10 miles north of Munich.

“It was the first time we knew of concentration camps. What we saw was enough to turn your stomach,” he said.

Seltzer was with 20th Armored Division troops who thought they were discovering a prisoner of war facility on Aug. 29, 1945. Instead, they found a camp piled high with the tangled bodies of prisoners and mass graves, as well as 31,000 to 32,000 others still alive but starving and emaciated.

Seltzer was ordered to take photos to document the horrible discovery, which haunted him in nightmares for years despite his efforts to forget.

Five years ago he retraced his war steps on a six-country, 16-day tour — this time with his wife — from England to France, the Netherlands, Belgium, Luxembourg and finally to Germany, a trip he said closed his war chapter by seeing what those countries have become today.

“He was most stunned by the eerie quiet at Dachau, where he broke down in tears, and by the changes at Omaha Beach.

“It didn’t look at all the same,” he observed about the beach. “There is a road there now and motels where the German machine guns were.”

At Dachau he remembered the “smell of death” that had permeated the camp that August day in 1945.

Reflecting on the war as a whole, Seltzer said if it wasn’t for the Air Force, the war would not have been won.

“Soldiers were always looking to the sky to see if our bombers were there,” he remembered.

Seltzer did not wait around after the war was over for his Bronze Starfor staying behind during a retreat and blowing up his radio equipment during the Battle of the Bulge so it would not end up in enemy hands. He did not receive it until 67 years later in 2012 after his former commander, retired Brig Gen. Harold Rice of California (a colonel during the war) contacted him and wrote the information needed for the military decoration.

The heritage museum has a website and is collecting memorabilia from local veterans. It’s working on a mobile museum exhibit it will unveil this spring and use until it can build a world-class museum, possibly on the perimeter of Joint Base McGuire-Dix-Lakehurst.

“We are hoping to do more videos like this,” said military retiree Nelson Mellitz, a museum board of directors member who also is a director of the Washington museum. “It will eventually appear on our website — www.afhmus.org — along with three other videos of war veterans that are already finished and we’ll also post it on YouTube.

Norman Rosenshine, a director at the Washington museum near Dupont Circle, said he has known Seltzer for several decades through the state Jewish veterans organization.

“He has fascinating stories and had a more interesting military life compared to many soldiers. As soon as I heard about the documentary, we said ‘yes’ to accepting it and will include it in our museum’s World War II exhibit,” said Rosenshine, a former Elizabeth, Union County, resident who now lives in Charlottesville, Virginia.

At the Spring Hill Assisted Living theater, several of Seltzer’s children and grandchildren watched the documentary with him.

Son Richard of Marlton called the film “tremendous” and used the same word to describe his father as a person.

“We never knew these stories for a long time because he didn’t tell until we had our own kids,” he said.

Cherry HIll Councilwoman Melissa Kane presented Seltzer with a council proclamation declaring him a “true American hero” not just for his war service but for serving in veterans organizations to preserve their legacy and for his educational efforts in speaking to local high school students about his experiences.

“Arthur is worthy of every word in this proclamation,” said Kane.”And the video was fascinating and educational.”

Cherry Hill High School East teacher Tom Rosenberg praised Seltzer for speaking to more than 700 of his history class students over the past 10 years.

“He is an invaluable resource and told students what no book could ever teach. He is honored and beloved by all who know him,”  Rosenberg said.